Is Havana’s Someillan Building on the U.S. Purchase List? 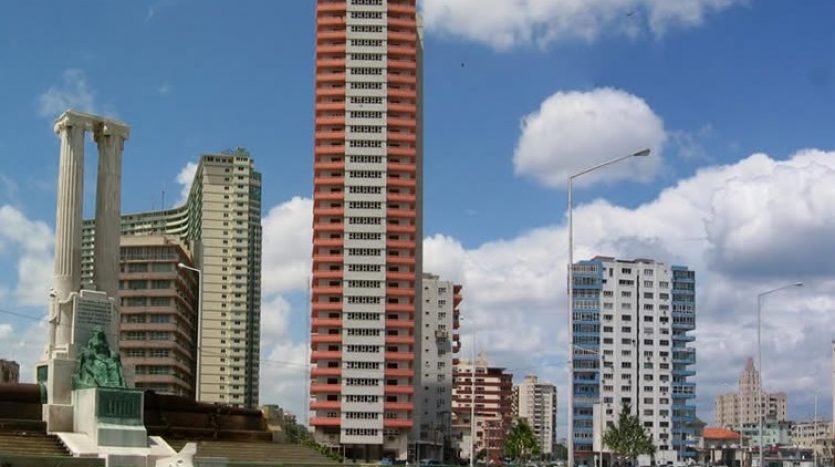 After a two-year refurbishing process under Cuba’s Palco real estate agency, everything indicates the Someillan building located at the intersection of Linea and O streets, facing Havana’s Malecon ocean drive, will became one of the residential complexes for the new U.S. embassy in Cuba.

The reason behind this choice is more than obvious: the building is located in Havana’s exclusive neighborhood of Vedado, near the Hotel Nacional, the Capri and Habana Libre, a mere 400 meters away from the US embassy.
It has a garage, large apartments (approximately 700 square meters each) and an enviable view of the city. From the building, one can easily walk to popular nightclubs such as the Gato Tuerto or La Zorra y el Cuervo. The 30-story building was built in 1957, designed and planned by Fernando R. De Castro Cardenas and Jose A. Vila Espinosa.
Facing the Someillan building, about thirty meters away, is the monument to the victims of the Maine, whose pillars once held the imperial eagle, toppled in 1961 following the Bay of Pigs invasion, a symbol of the falling out between the two nations – now a metaphor of the new political game between Washington and Havana.
“We’re almost done here,” a construction worker who preferred to remain anonymous told OnCuba. “We’ve been working for months. Others were working here before us; they bring us in for different phases of the work.”
The young man brushed aside the rubble from the last remodelling, between the enormous building and another, smaller edifice known as the “small” Someillan (located a few meters away, down Linea street).
“What they told us is that it may be used for an embassy, a hotel or private residences. We don’t exactly know who’ll live here,” he said.
A short, stout construction worker, an expert in finishings for luxury apartments, interjected, somewhat loudly: “The whole building’s for the Americans!” He opened his hands, covered with the whitish filling used to plug up cracks and holes.
The information has been confirmed by recent State Department documents published by the Federal Procurement Data System, which report on the rental of the building’s penthouse by the US government, as well as on the expansion of the apartments and others. Expense reports, brought to light by journalist Tracey Eaton, reveal that, on June 3, 2015, the US Interests Section in Havana paid Brooklyn’s Star Creations Inc. US $4,414.03 for kitchen equipment and household appliances for the Someillan penthouse.
It is not yet known whether the US embassy – whose diplomatic headquarters are renowned due to their immense staff – is only considering the purchase of the penthouse or whether it will buy other properties in the building (currently leased from Palco). We can have a sense of the embassy’s plans, however, if we have a look at other recent transactions, such as the acquisition, “for Someillan apartments” (in plural) of more household and kitchen appliances, purchased from Caprice Electronics (also a Brooklyn company), for a total value of US $20,480.90.
The Someillan penhouse has a priviliged view. There, before the gilded colors of dusk, the next U.S. ambassador could well find respite from the tensions caused by implementing U.S. policy on the island. We can only hope Havana’s sea breezes will do him good.